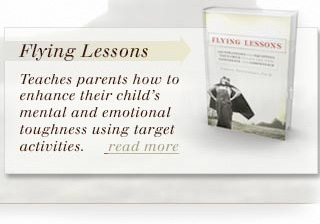 Teaches parents how to enhance their child’s mental and emotional toughness using targeted activities. Hardcover. Signed copy. This book shares with entertaining and informative stories of how people have achieved mental and emotional toughness. This book also is packed with applied exercises that parents can do and participate with their children. The goal of the book is to get your children more emotionally and mentally tough for life. Below is an example of a chapter:

Driving to spring training from New York, Yogi Berra and his wife were terribly late. They were driving all night and Yogi’s wife fell fast asleep. To make up for lost time, Yogi took a short cut that eventually turned into a dirt road, with more dirt than road. His wife suddenly awoke, very startled, and stated to Yogi, Honey, I think we are lost. Yogi, with his pearls of wisdom, returned, Yeah, but we are making great time. (1)

Without vision, you may get somewhere, but most likely it will be a somewhere you don’t want. However, once discovered, your vision becomes the neon sign for guiding you to the correct path.

Vision is what drove Christopher Reeves to success as well as inspired him through his tragedies. Starting as a trained theatrical actor, he captured one of the most coveted roles in the 1970s Superman. His rise to fame was fierce and he played many other roles that propelled him to the top of the Hollywood game.

Then tragedy befell him. While riding, his horse bucked him off. He landed wrong and cracked his vertebrate at the top of his neck. It was so severe that he became paralyzed from the neck down. He could not even breathe without a ventilator.

But Christopher Reeves did not give up. Recalling the great visionaries he admired (one was President Franklin D. Roosevelt who challenged his scientific community to find a vaccination for Polio within his presidency), Christopher Reeves decided to make his own visionary statement. While at the age of 43, Reeves said he would stand up and make a cheer on his 50th birthday party.

This vision guided his every move for the next 7 years. Tirelessly, he made speeches around the globe encouraging people to give money for spinal cord research. He was a man convicted to help find a cure.

Unfortunately, by his 50th birthday, the research had not progressed enough for him to stand and toast his friends and family. Sadder was his death. But his memory is the inspiration that drives many to continue his vision. (2)

Most parents want their children to have a powerful vision for their life, rather than float aimlessly throughout their years. This type of guidance, however, is one of the most difficult parental tasks. The following activities were designed to help your child to develop a vision as well as find a life path:

Almost four hundred years ago, John Dunn wrote, Every man’s death diminishes me because I am part of mankind, and therefore never send to know for whom the bell tolls, it tolls for thee. Dunn knew the importance of being interdependent with society as well as the meaningfulness of giving back to the community.

Today, many people are concerned with giving back to society. One of those is Coach Joe Paterno of Penn State. He is one of the most successful college football coaches of all-time. As such, Coach Paterno usually had a winning season, and as a result, he had many temptations and many offers to leave for more money.

One offer came to him by the way of a million dollars. In 1972, Paterno was content at Penn State, but only making $35,000. Then the phone call came. Bill Sullivan, the president and principle owner of the New England patriots offered Paterno more than one million dollars if he would coach his team. He was also going to get part ownership and $100,000 as a signing bonus. Even by today’s standards, that is a lot of money and a great contract.

Coach Paterno turned down that golden contract, however. He realized that money was not what drove him. He loves to win, but he believes in something greater than victories on the gridiron. His purpose in life is to help young adults grow in both their personal discipline as well as their educational development. This purpose has been his beacon for more than 40 years. (3)

2) What have been some great contributions to our world?

3) What do you see as meaningful?

4) What direction would you like to take in the world?

5) What contributions would you like to make to the world?

What does your child value?

Have him make a list of 10 aspects that he values. These may include sports, civil rights, writing and speaking well, money. Do not judge what he writes, but just let him construct his own list.

Now that your child has become aware of his two key essentials (a purpose statement, and a list of his values), the steps to discovering his path become apparent. More importantly, these two ingredients can help your child choose the right college major and pick a meaningful career. (While this activity can be used at any age, it may be more appropriate for older children)

First, have your son write down 5 college majors. Then have him list 5 possible career choices.

Next, discuss together how his major and career choices line up with his purpose and values. The majors and careers that match up easily are the most appropriate choice. If they flow, without any difficulty, then these are great choices.

Conversely, those choices that have to be bent and pushed into his purpose and values should be forgotten. These choices will not work in the long term.

Once your child has discovered his essentials, his searchlight will shine on his path in life.